After 32 days of suspense and surprises, the world can finally breathe again. Whether you were watching the 2014 FIFA World Cup to see the U.S. goalkeeper break a World Cup record, or to see if Ronaldo would rip his shirt off in the rain (taka a moment to picture it… *deep sigh*) there’s no denying that the tournament this year was exciting for all.
As a designer, something I look out for every World Cup year is its branding. Each World Cup is branded in a completely unique way, so it’s always fun to see what the next host country will come up with. The official emblem, for example, is created years in advance of the tournament and usually represents a combination of soccer sportsmanship, a global community coming together and a little something about the host country. The branding is also shown in everything from posters to tickets, and even the soccer balls themselves.

It’s interesting to see the evolution of World Cup branding throughout the years and how certain elements have become more carefully designed and branded. What’s also clear is that as the years have passed, more FIFA corporate brand consistency has helped unify the still very distinct tournaments.

Even though we’re still years away from the next World Cup, the official emblems for the 2018 World Cup in Russia AND the 2022 World Cup in Qatar have already been designed. I can’t wait for the next games. Four years is simply too long to wait.

Check out these awesome articles for more info on the branding evolution for the FIFA World Cup:

The 20 posters of the FIFA World Cup 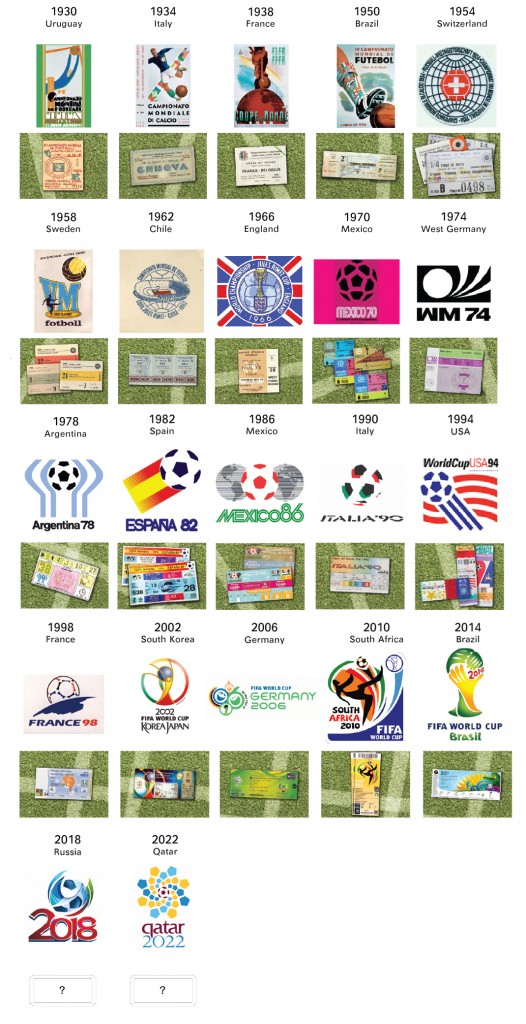