How Apple escaped from the doldrums of Sears to create the coolest retail space on planet Earth.

Virginia’s Tysons Corner Center, opened in 1968, was one of the country’s first shopping malls. But on May 19, 2001, it would notch another first. The line began forming in the predawn hours, as many as 500 people assembling in the darkness. After that number doubled, security guards stood by to keep the crowds from violating the maximum-occupancy laws. In time, the line stretched through the mall itself, doubling back like a serpent and pouring right out onto the sidewalk. “I have lived in this area for 17 years,” said one man. “I’ve never seen anything like this.”

Indeed, nobody had. “This” was the opening of an Apple Store—the very first one. 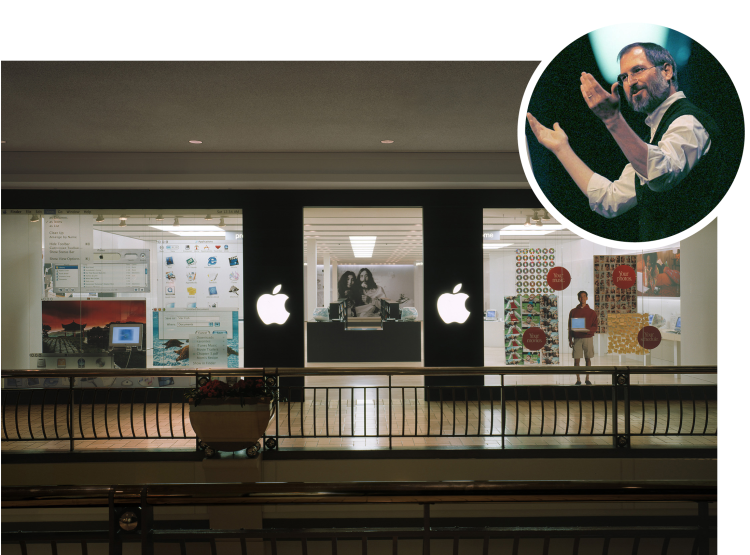 Opened in May of 2001, the first Apple store (top) was the culmination of the vision of Steve Jobs (inset), who’d tapped a number of retail gurus to help plan a signature space that would free Apple from its longstanding problems at the retail level.

Seventeen years later, it’s hard to imagine the retail world without these gleaming minimalist boxes of blond wood, brushed steel and astounding revenue. There are now more than 500 Apple Stores in 24 countries—272 of them stateside—and the concept continues to grow and evolve. Apple raised the curtain on its latest prototype in San Francisco in 2016; it’s busy converting the historic Tower Theater in downtown Los Angeles to house another store; and so far this year, it’s opened new retail locations in Austria, Mexico, Japan and Macau, to name just a few. 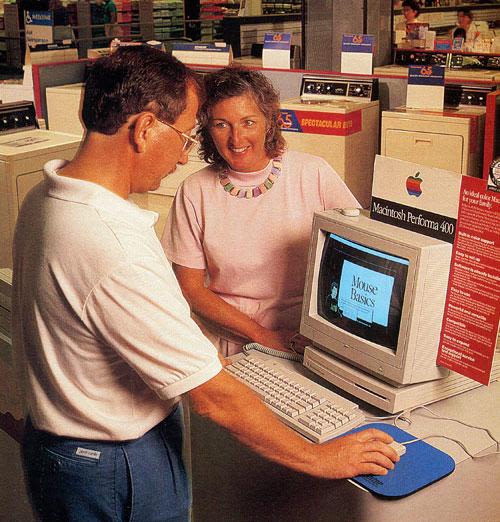 Prior to 2001, the brand sold its goods in mass retailers like Sears, where the environments hardly conveyed the brand’s personality.

With at least one Apple Store in every major city, it’s easy to overlook just how radical a development the stores were—and continue to be. At a time when brick-and-mortar retailers are shuttering thousands of stores, Apple locations reportedly draw 1 million customers each day and boast the highest per-square-foot sales of any concept.

Among the new innovations was the Genius Bar, which offered support after the purchase—a novel idea.

The logical question: how? There are many reasons, but the essential truth of the Apple Store is that it isn’t (nor was ever intended to be) merely a store. As Michael Ventura, CEO and founder of design firm Sub Rosa, observes: “These aren’t retail channels as much as they are brand beacons—places where Apple fans, customers and potential new clientele can come to be immersed in the brand.”

Apple Stores were borne of necessity. For the first half of its existence, Apple sold its wares through the likes of OfficeMax, Circuit City and Sears. But the company hemorrhaged money throughout the 1990s, and one of Steve Jobs’ first tasks on his return as CEO in July 1997 was reporting a $161 million quarterly loss. With help from Gap’s Mickey Drexler (lured to Apple’s board) and merchandising visionary Ron Johnson (hired away from Target), Jobs concluded that Apple products were never going to sell well inside big-box retail stores, where sales staff were undertrained and customers were naturally drawn to cheap PC clones selling one shelf over. The solution was to create its own stores where, he later said, “customers can … learn and experience the things they can actually do with a computer.” 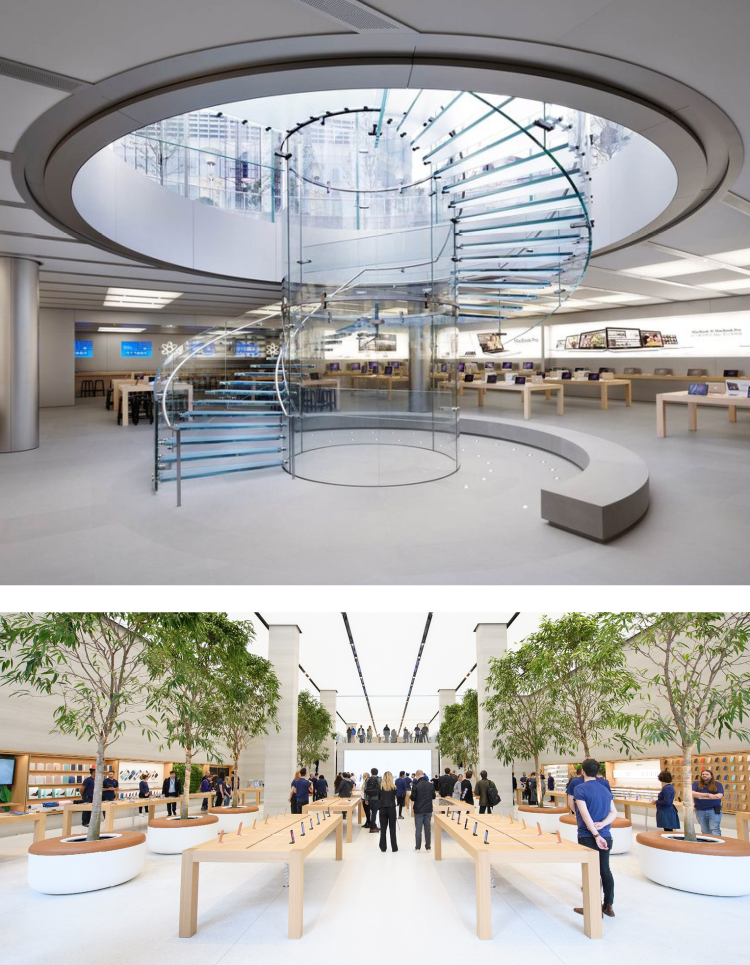 What makes the Apple Store such a singluar experience? Christina Papale, svp of strategy and director of innovation for CBX, ventures that the stores function as a kind of retail correlate of a church. “It’s a house of worship for the religion of Apple,” she said. “They’re supplying spiritual access to Apple, and they do it in a way that’s akin to great religious brands.” The soaring interior spaces, filled with light and air, are cathedral-like in themselves. The rows of wooden tables function as pews where, instead of praying, visitors interact with Apple products. The central feature of many stores is the run of plate-glass steps. “It’s like a stairway to heaven,” Papale explained. “It’s not on this plane of being. If you can access that spiritually, it becomes a purchase.”

To craft its stores, Apple has worked with a variety of design firms—Gensler, Eight Inc., Foster + Partners, Bohlin Cywinski Jackson—and yet all make use of clean, unobtrusive elements like glass, stone and maple, and all lavish square footage on light and air. But according to Clark Goolsby, CCO of Chase Design Group, the beauty of the store’s design isn’t the aesthetic as such, but the interface it creates. “The store is designed to stay out of the way of the user experience and facilitate interaction with the products,” he says. “This environment is successful because it supports the promise of personal expression.”

You can almost see Steve Jobs smiling at that.