The Ivanka Trump clothing and accessories brand has been highly visible in headlines and on television this past week. But in North Jersey stores, you have to look pretty hard to find it.
While stores, including Macy’s, Lord & Taylor, T.J. Maxx and Marshalls, still carry the brand, at most retailers it isn’t being given star treatment in the aisles or even its own display racks.
“Ivanka Trump? You mean the dresses?” said a salesclerk at Macy’s in Paramus, when asked about the line. “I think there are some over there, way in the back.”
Store employees said the line – which made the news when President Trump assailed Nordstrom on Twitter for dropping the Ivanka brand, and then when his adviser Kellyanne Conway urged supporters to buy it – isn’t triggering boycotts or political battles in Macy’s dressing rooms. Rather, it is being met with something retailers fear far more – a lack of interest.
Marketing experts said the brand’s troubles aren’t just political. The biggest problem facing it, they said, is an identity crisis. The Ivanka Trump brand must address the critical existential questions all celebrity brands must be able to answer – who are you, and what do you stand for?
“Her brand has always been her lifestyle and her lifestyle is inextricably linked to her father, who is a highly controversial figure right now,” said Dustin Longstreth, chief marketing and strategy officer at the New York-based brand agency CBX.
More Ivanka, less Trump
“She has two choices,” said Longstreth, who has worked with brands such as General Mills, PepsiCo and Arby’s. “She can continue to double down and connect it more directly with her father,” he said, or “identify something that is truly independent so it becomes more Ivanka and less Trump.”
The Ivanka Trump brand, which started with a jewelry line launched in 2007, and added a licensing deal for clothing in 2012, had a strong brand niche, before her father’s presidential bid, as a fashion line that spoke to young women who wanted to be like Ivanka.
“She appealed to a very specific woman – young, working women who thought she was so pretty and had it all,” Julie DeLoca said. Her branding company, Loca Marketing, has offices in Short Hills and Manhattan, and she has worked with Rebecca Minkoff and Elie Tahari, among other fashion brands.
The Ivanka brand had “on-trend clothing and accessories that were a reasonable price,” DeLoca said, and that conveyed the message that “you could be a stylish working mom.”
The line was “just the right combination of aspirational, yet accessible,” she said.
The clothes and shoes sold well, and “she got very wide distribution very early on because of her name,” DeLoca said.
When Ivanka launched her shoe line in 2012, she promoted it with an appearance at the Nordstrom store at Westfield Garden State Plaza in Paramus.
Nordstrom recently announced it was dropping the line because of poor sales, prompting Trump supporters to claim the department store chain had caved to pressure from anti-Trump forces who had organized a boycott.
Bottom line, not boycott
Co-president Pete Nordstrom, in an email to employees that was obtained by Fortune magazine, said the bottom line, not any boycott, was responsible for the decision. “Every single brand we offer is evaluated on their results,” Nordstrom said. “If people don’t buy it, we won’t sell it.”
Marketing and branding experts agreed that if the clothes were selling well, they would probably be in the stores.
A check of retailers in North Jersey that carry Ivanka Trump merchandise showed that only Lord & Taylor features the brand with dedicated displays and special signage. At the Lord & Taylor at Westfield Garden State Plaza, her shoes had their own display table. The women’s dresses section of the store has a large “Ivanka Trump” sign in its designer section. On Thursday, however, none of the dresses displayed near the sign bore the Ivanka Trump label.
In Totowa, at the T.J Maxx store – another retailer that has said it will remove Ivanka Trump displays but will continue to sell the merchandise – not a single piece of Ivanka Trump clothing or footwear could be found.
Eileen Potrock, owner of the E Designer Resale consignment store in Cliffside Park, said she’s seen the value of Ivanka Trump fashions drop on the resale market. While she has never sold the brand in her store, because she specializes in higher-end designer fashions, she monitors the resale market and has seen other stores decline to sell it.
“There’s no demand for it. People aren’t looking to buy it, at least not in the Northeast,” she said.
Potrock said she feels sympathy for Ivanka Trump’s situation. “I feel bad that the sins of the father are affecting the daughter,” she said.
Lack of demand in the Northeast, Potrock said, may not reflect the rest of the country. “I would be interested to see how her brand is affected in the states Trump won,” she said.
Revenue growth cited
A representative for the Ivanka Trump brand, when asked about annual sales and how sales did in 2016, responded with a statement from Rosemary K. Young, senior director of marketing, who asked that it be quoted in its entirety.
“The Ivanka Trump brand continues to expand access across categories and distribution with increased customer support, leading us to experience significant year-over-year revenue growth in 2016. We believe that the strength of a brand is measured not only by the profits it generates, but the integrity it maintains. The women behind the brand represent a diverse group of professionals and we are proud to say that the Ivanka Trump brand continues to embody the principles upon which it was founded. It is a company built to inspire women with solution-oriented offerings, created to celebrate and service the many aspects of their lives.”
Bloomberg News reported in December that the Ivanka Trump brand generates $100 million in annual sales. 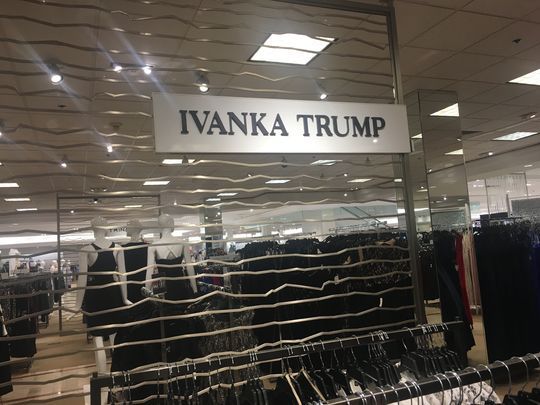 Ivanka Trump display sign at Lord & Taylor. None of the clothes surrounding the sign bore the Ivanka Trump label
Marketing expert DeLoca said Ivanka Trump lost her connection with her target customer when she became less involved in her business and more involved in campaigning for her father and, now, after the election, when she is taking more of a back seat to her father and her husband.
“She lost the people, and when the people don’t want your brand, that’s why Nordstrom pulled out,” DeLoca said.
Branding specialist Longstreth agreed. Nordstrom dropped the line, he said, because “it really wasn’t selling and they didn’t see a future in it.”
DeLoca said Ivanka Trump might be able to polish her brand’s image if she uses her power in the White House to spearhead a working women’s initiative, such as family leave. “Maybe if she gets behind something like that in a huge way and (goes) back to being that working-mother role model,” the brand will bounce back, she said.
Some marketing experts even think the controversy will boost the brand, as the president’s supporters rush to buy his daughter’s products in a show of solidarity.
Mark Stevens, chief executive of the marketing and branding firm MSCO, said the same intensely loyal Trump supporters who drove hundred of miles to attend his rallies and voted for him, likely will rally behind his daughter.
“If there is one thing everyone has learned over the past year and a half, it’s that their brand is Trump and their fans have a loyalty to it that even Nordstrom can only dream of,” Stevens said.
Originally published in USA Today
Photos courtesy of USA Today