Belsomra is a hell of a drug.
For an insomnia medication, this was a real breakthrough. The pill is an orexin inhibitor that targets the pathways of the brain which keep us awake, effectively shutting them off and telling the brain to go beddy-bye.
But because of the type of drug it was, it had to be packaged in a blister pack, not just to keep a prying child’s hands away, but because it would ruin the efficacy of the drug. Seems reasonable enough, right?
Now imagine that you haven’t slept since you don’t know when. Maybe you’re worried about losing your job. Maybe you have a couple kids that take up every last minute of your day. Maybe you have a set of nightly rituals and if one goes wrong, you know you won’t sleep tonight. Did you draw a warm bath? That First Rain incense burning? The heightened state of anxiety that plays out is just as routine as the sleepless nights.
“These are people whose lives and health are in jeopardy,” CBX Strategy Director Brian McDonagh says. “So here’s a medication that may solve all of your problems, but best of luck getting it out of the package.”
According to Brian, there’s a disconnect between the various drug manufacturers and medical device makers and the consumers they help. “Their focus, and rightly so, has been on the solution and the drug,” he says. “That whole mindset is about process, control, and rigor. You don’t want something to end up on the market that’s ineffective or dangerous. It’s basically the scientific process—test, repeat, verify. Everything about that is methodical and clinical.”
So how can designers eliminate all the of the physical, perceptual, and emotional barriers for patients along the way? 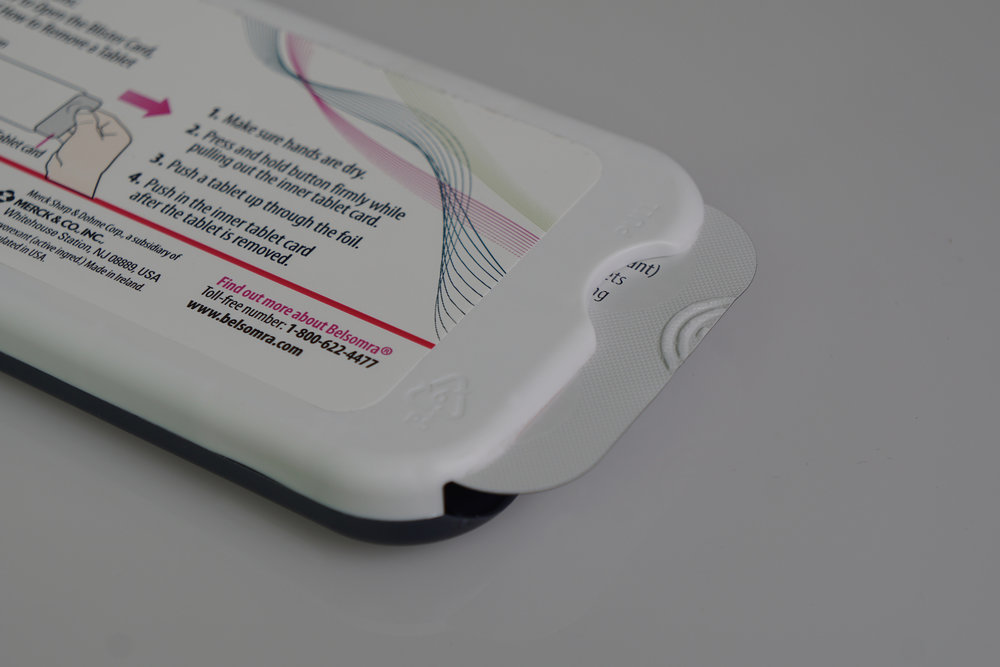 In the case of Belsomra, CBX had the opportunity to make the packaging much more functional. Because the chemical integrity of the pill couldn’t be compromised, the blister pack wasn’t something that could be entirely eliminated. The packaging first came as a large rectangular box of blisters with even more boxes inside as well. They cut out the extraneous packaging waste while reducing the cavity size of the blister so that it was less a gigantic brick of plastic and more like a smartphone. They also improved the opening and closure of the product so that it’s much more navigable—now, there’s a clear front and back.
“You have to have an empathy gene,” Brian says. “That’s the hidden gem in all of this. Everyone I’ve worked with—whether it was a medical device or a vaccine—99.9% of these guys really want to help people.” But no matter how groundbreaking or effective the drug, if it doesn’t get inside the person’s body in the right way at the right time, then what’s the point of making it?
But in order to do this, the most important thing, Brian says, is getting out there and understanding the client. “You have to go and talk to people,” he says. “You have to go into where they live and work and observe. Be immersed as much as you can.”
So where is medical packaging going? Does medicine even need to look like medicine? Just because a bottle has a screw-tap today doesn’t necessarily means it needs to be that way tomorrow. Epinephrine doesn’t need to be administered from a $600 gluestick. Just look at the EpiPen’s competitor Auvi-Q with it’s slim, easily-portable and helpful design.
“No one wants to be reminded that they’re sick, Brian says. “A lot of stuff coming out is bright and optimistic—it doesn’t look clinical.” Part of that comes down to how we speak to patients, and designers can remove that stigma that comes from being sick. How do you let them own it and not be ashamed?
Designers also need to be aware that most medicines will soon be connected to your smartphone. In the case of schizophrenia medication Abilify MyCite, a small microchip is embedded with the drug that digitally tracks whether or not a patient has taken their medication. Understanding the relationship between how we package medicine, how we’re signaled to take it and how it connects to our lives as an everyday object needs to be considered.
Brand managers and designers can help bridge the gap and do the heavy lifting that medical providers cannot, so they can instead focus on developing the products that can potentially save our lives. Designers can help make the products more human, easier to use.
“After all,” Brian says, “a pill not taken helps no one.”
Originally published in The Dieline

I can shop clearly now: entering a new decade of retail