The recent emergence of craft beer illustrates the significance of branding. As many now know, craft beer has become one of the hottest growing categories on the market, and with this growth comes fierce competition.
Here’s a little bit of context: In the past four years alone, the craft beer industry has grown from 1,625 breweries in 2010 to 3,418 breweries in 2014. That’s an increase of almost 210%! Needless to say, this spurt has left brewers scrambling to find new ways to stand out on crowded shelves and rotating draft lines. But the question remains, how can small breweries drive brand awareness in an industry flooded with marketing dollars from beer giants like Anheuser-Busch and MillerCoors? Well, despite limited advertising budgets, craft brewers have quickly discovered that strong branding and packaging design can be their biggest ally for differentiating and promoting their product in market. According to Ian Knowles of Spruce & Norton, an NYC-based craft beer investment firm, “The new generation of beer drinkers are looking for depth of character in the brands they purchase, they look for sincerity in the product offering and how the story is being told. Ultimately, this starts with a strong brand identity, the ones that understand this and execute accordingly will be the ones to thrive.”
Take, for example, the ever-crowded beer selection at your local grocery store. It can feel pretty intimidating. As a consumer, odds are that you’ve probably never heard of, let alone tasted, over 70% of the beers looking back at you. But this lack of bias is exactly what makes good branding all the more essential. One brewer who I’ve seen take this insight to heart is Uinta, a Utah-based craft brewer. With just one look at their packaging, one feels the vibe that the brewery offers its consumers. Bold, illustrative imagery of the great outdoors makes me picture fun activities such as hiking, fishing or camping during which Uinta would be most enjoyed. But what truly separates Uinta from other competing beer brands is its portfolio, which offers a consistent visual voice while never losing sight of each beer’s individual brand story. 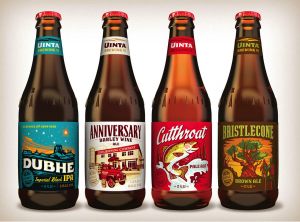 http://brewlust.com/uinta-brewing-makes-canning-look-good/
This shift in consumer preference for richer brand storytelling has not gone unnoticed amongst macro brewers. Beer giants like Budweiser, Miller and Busch have all recently updated their brands to compete with craft brewers like Uinta that are now considered a real threat. Each macro brewer has taken a different approach to address this new challenge.
Budweiser has chosen to keep its classic packaging and double down on its existing brand story by promoting macro beer that is “Brewed the hard way.” This was best exemplified by its Super Bowl ad, which chided craft beer drinkers and brewers alike with the phrase, “Let them sip their pumpkin peach ale, we’ll be brewing us some golden suds.” By identifying itself as the tried-and-true, classic beverage choice, Budweiser has, in essence, given its consumer base a more personal narrative to identify with. 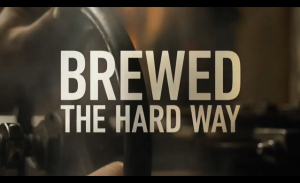 http://adage.com/article/special-report-super-bowl/bud-proudly-macro-swagger-filled-super-bowl-ad/296932/
To better compete with dynamic craft brands, Miller and Busch have also taken steps to make their brands feel more personal to consumers. Miller, which has experienced declining sales since 2009, recently saw a significant boost after redesigning its packaging to leverage the brand’s heritage more effectively. Its nostalgic packaging appeals particularly to millennial consumers, who are known to appreciate stories with more depth and authenticity. According to Ryan Reis, senior director for Miller’s family of brands, the packaging has even had a psychological effect on consumers, with some claiming, “I think the beer even tastes better.” 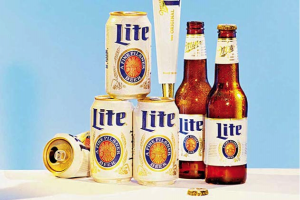 http://www.bloomberg.com/bw/articles/2014-09-11/miller-lites-original-label-sales-boost
And similar to Uinta, Busch has redesigned its packaging to appeal to certain consumers’ unique lifestyles. This can be seen through its limited edition cans, which cater to its blue collar demographic by depicting activities such as hunting and fishing. In this way, Busch is giving its brand a more humanized personality while also inviting consumers to interact with the brand in new ways. 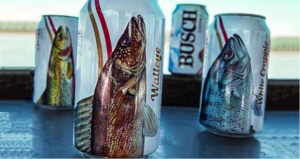 So what can we take away from this growing category? I find it particularly refreshing that small independent companies have the ability to disrupt an entire industry through branding and design. By focusing on good storytelling, craft brewers have pushed their macro competitors to be more creative, take greater risks and start to move away from their decades-old, largely stagnant branding campaigns. I can only hope more companies are inspired to catapult their brands forward by being brave and repositioning their brands to focus on a strong and connected brand story (or “big idea”) that speaks to their consumers on a more personal level.

I can shop clearly now: entering a new decade of retail