The gasoline canopy: For most of its existence, it has been a function-first structure, there to provide shelter from the weather and lend light at night.
And in the 50 years since states began legalizing self-serve gas pumps, the canopy has largely retained the shape that reflects this practical purpose: the rectangle. Pure economics has bested creativity, keeping this architectural element frozen in time.
“In the United States, you have so many legacy sites that have been around for so long that to tear [the canopy] down … it’s easier to repaint, restripe and reclad what already exists,” says Joe Bona, founding partner and president of retail design firm MoseleyBona Retail, Franklin, Mass.

But as fuel’s share of overall c-store profits continues to fall and in-store profitability rises, it’s time to redefine the canopy’s function and reconsider its investment potential. Yes, it still needs to protect customers from rain and sun. But the entire forecourt can do so much more.

“It’s one of first things you see, a piece of communication that really reaches out, grabs people’s attention and signals the business that you’re in,” says Bona, who has designed canopies for retailers such as Wawa in the United States, COPEC in Chile and Axion in Argentina. “From that standpoint, the canopy is a pretty important piece of communication.”

Fueling is an act of faith, Bona says. And through the forecourt, retailers must show that they sell quality fuel via visual, perceptive and experiential elements. A look at leading retailers and their signature canopies shows the potential when one breaks the rectangular mold. 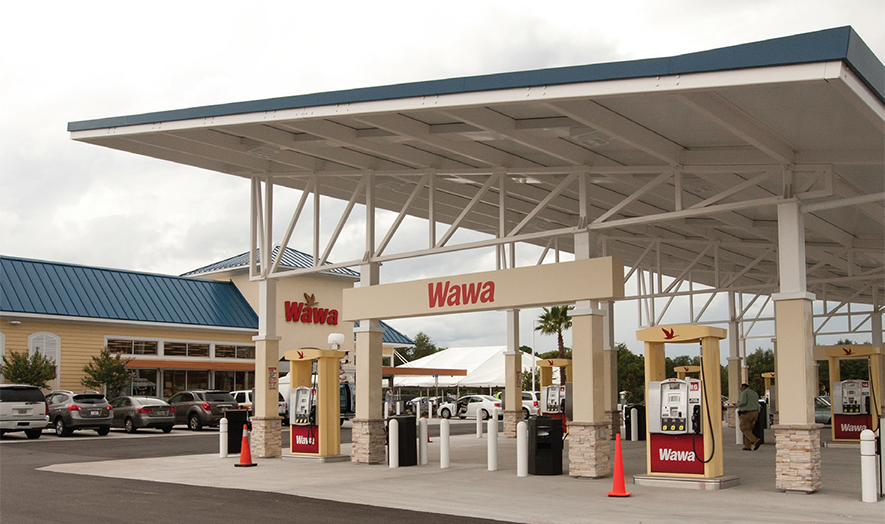 Consider the Wawa wing. Scott Boorse, facilities senior external vendor manager for Wawa Inc., Wawa, Pa., was part of the team that orchestrated the chain’s entry into the fuel business 20 years ago. The big question back then: How could Wawa grab a greater share of the declining liquid-fuels market?

Wawa understood that one factor guiding customers’ fuel buying process was the external appearance of the site. It needed to be inviting, “a place you want to go, that drives enthusiasm,” Boorse said during an educational session at the 2016 NACS Show. With that in mind, Wawa attempted to convey a “fresh and friendly” feel for its fuel island, beginning with a distinctive, cantilevered wing-shaped canopy designed by New York-based design firm CBX, where Bona previously was retail division president.

“This is really a branding element that can dictate what your store is all about,” said Boorse, who describes the canopy as one of the most underused branding opportunities. The shape is so unique that Wawa trademarked it, and even chose to omit its logo.

“Wawa’s canopy is so recognizable, you don’t need it,” Bona says. “It becomes part of the brand.” 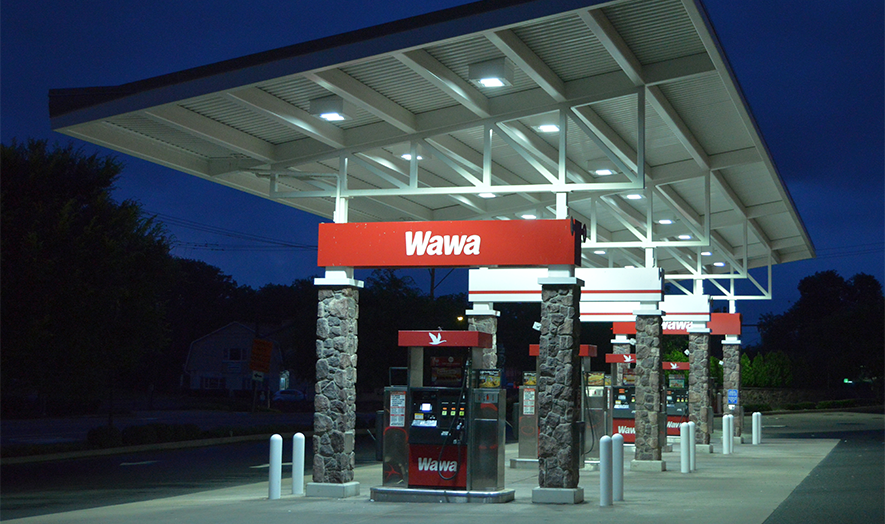 Lighting is another element of Wawa’s exterior branding, with the goal of providing a feeling of safety without blinding the neighbors, Boorse said. It designated six zones of lighting for store exteriors, using LED bulbs with varying levels of lumens and footprints for different aesthetic effects and purposes.

When it comes to the canopy, consider lighting possibilities beyond the underside, Bona says. “At nighttime you’re competing with other retail establishments on the street: fast-food places, shopping malls, etc.,” he says. “How can you stand out a little bit? You can get the underside of the canopy and the face to be engaging and stand out.” 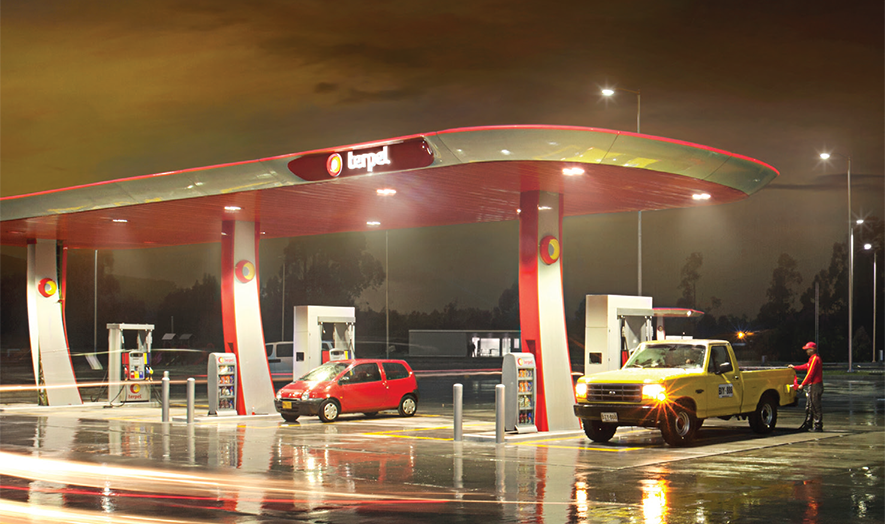 Most canopy faces today are made from aluminum composite material, which is durable and easy to maintain, with a fairly long usage life. The face can be positioned flat or at an angle, and it accepts film for graphics.

Fiberglass offers another medium for producing alternative, proprietary shapes. For example, when Bona worked for CBX, he helped design an oval fuel canopy prototype for Terpel, the fuel retail arm of Colombian oil and gas company Organizacion Terpel S.A., in 2013. “To create that complex, compound curve, we made fiberglass molds and created the canopy from fiberglass. It’s durable, unique [and] allowed us to do something different,” says Bona.

But the more you break the mold, the more costs could rise. “If you’re not a sizable chain that could justify the cost, look at the asset you have and how to improve it without ripping it apart,” he says.

Larger chains with sizable advertising budgets, however, should consider whether a custom canopy is a good justification of marketing dollars, Bona says: “It’s a one-time cost, but one you can leverage and amortize over the life of the site.” 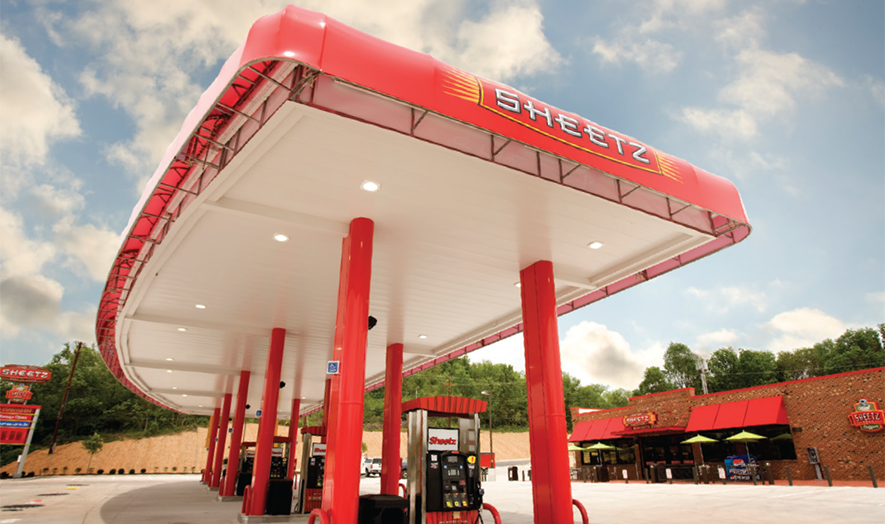 The curved, red, fabric-covered canopy at Sheetz’s newest stores carries over the look and feel of the main profıt center: the c-store.

But at the same time, the canopy pulls its own weight.

“That whole look, it’s curvilinear, it’s internally illuminated, it glows red: The whole canopy acts as a beacon from a distance,” says Limbach of Chute Gerdeman, which spearheaded the store and canopy redesign.

A unique canopy such as this helps chip away at the “gas penalty” that fuel retailers continue to pay as they move increasingly into foodservice, Bona says. And it helps further delineate the identity of the retailer, which can be especially important for major-oil-branded operators.

During one project for a branded multinational retailer, CBX conducted consumer research that found most customers referred to the operator’s sites by the name of the fuel brand, not the store brand. Although branded retailers may face constraints on the canopy design, they should still attempt to forge some degree of distinction.

“As the store plays greater importance on the profitability of the site, it’s time to rethink this,” says Bona. “You still want to be … that piece of communication that they’re in the [fuel] business, but also find balance that doesn’t negatively impact the store.”

As in-store sales play a bigger role in site profitability, more retailers are moving toward canopies disconnected from the store. And with that, Bona says, “up-front parking becomes key to success.”

In positioning the canopy, retailers should consider sufficient up-front parking, with room for customers to drive into and back out of spaces, plus maneuver around pumps. They also should consider ingress and egress.

This isn’t just about physics. “It’s about comfort,” says Lynn Rosenbaum, vice president of brand environments for Chute Gerdeman. Beyond space, landscaping can also play a role, creating a comfortable ambience around the concrete-heavy fuel island.

“They want to be known as a great convenience store, and Laredo Taco wants to be recognized as a real restaurant alternative, so they separate the building from the canopy,” says Rosenbaum.